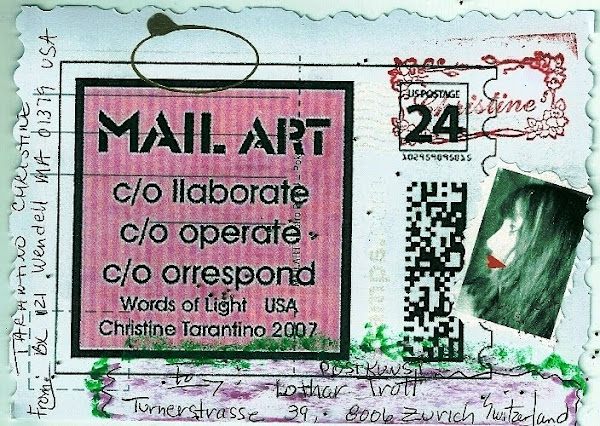 With the Blood of a Daylily - Poems & Drawings by the Homeless Poet by Christine A. Tarantino, published by Words of Light:http://wordsoflightbooks.blogspot.com/2012/08/with-blood-of-daylily-poems-drawings-by.html

THESE HANDS PRAY FOR GERONIMO, a visual poem of American Indians, by Christine A. Tarantino, published by Words of Light:http://wordsoflightbooks.blogspot.com/2012/08/these-hands-pray-for-geronimo-by.html

Christine A. Tarantino series of 40,"Being Human"
published by Redfoxpress, Assembling Box #20,
Ireland.http://fluxusa.blogspot.com/2012/08/assembling-box-20-christine-tarantino.html


RED LIPS - What is Your Version for Me? by Christine Tarantino is published by Words of Light now available in print or eBook formats. New version includes ALL 42 artists from 13 countries plus additional text and images by Christine Tarantino.http://fluxusa.blogspot.com/2012/08/new-red-lips-book-available-at-lulucom.html

Christine A. Tarantino/Words of Light publishes THE
SKY EMBRACES THE GREAT WORLD
by Walter Festuccia. http://www.lulu.com/shop/walter-festuccia/the-sky-embraces-the-great-world/paperback/product-20294750.html

Artists, you're invited to send a photo of yourself making art in your studio/workspace for the Link: Studios/Workspaces.
Send to: Words of Light MAIL ART, P.O. Box 121, Wendell MA 01379 USA.


Mail art is art which uses the postal system as a medium. The term mail art can refer to an individual message, the medium through which it is sent, and an artistic genre.
Mail artists typically exchange ephemera in the form of illustrated letters, zines, rubberstamped, decorated, or illustrated envelopes, artist trading cards, postcards, artistamps, faux postage, mail-interviews, naked mail, friendship books, decos, and three-dimensional objects.
An amorphous international mail art network, involving thousands of participants in over fifty countries, evolved between the 1950s and the 1990s It was influenced by other movements, including Dada and Fluxus.
One theme in mail art is that of commerce-free exchange; early mail art was, in part, a snub of gallery art, juried shows, and exclusivity in art. A saying in the mail art movement is "senders receive," meaning that one must not expect mail art to be sent to them unless they are also actively participating in the movement.

ART REVIEW; Gibes at the Experts From an Enigmatic Chatterbox By HOLLAND COTTER


"Ray Johnson's suicide by drowning in 1995 brought him the kind of public attention that his art never had. Not that he was ever invisible. But for years he invited exposure only on his own terms, and kept careful control of how high his profile rose.
He was, for example, at least partly responsible for the rare appearance of his seminal collages in museums or commercial galleries. Shows were proposed; typically, he hemmed and hawed and finally said no. Like Thoreau, Emily Dickinson, Gertrude Stein and so many other American thinkers one deeply and permanently loves, he had an ingrained distrust of institutions of all kinds.

An exception in Johnson's case, though, was the United States Post Office, in which he placed great faith. Very early in his career he invented what came to be called mail art. And for nearly four decades, from the 1950's until his death, denizens of the New York art world would receive his work, unsolicited, among the letters, bills and junk fliers that arrived in their daily mail.
Much of that work, produced under the auspices of Johnson's own mock-institutional New York Correspondence School, took the form of photocopied drawings and assemblages of found images. Some were customized for a particular recipient; others were designed to be passed on, chain-letter style, to third parties.

But behind the mail art lay other work that fewer people saw: notably, the collages that were Johnson's masterworks. That exalted label is not too grand for them. They are wonderful things. Made with cheap materials (shirt cardboard, Elmer's glue), they involved an intricate process of cutting and pasting, painting and writing, sanding and scraping, which often took decades to complete.

The visual elements they incorporated were equally diverse: pieces of photographs, magazine clips, commercial logos, abstract shapes, cartoons and, above all, words: jokes, puns, anagrams, song lyrics, poetry, nonsense syllables, exclamations, dedications and lists of names of artists and actors, social luminaries and friends. The results amount to an urbane, literate outsider art by a consummate insider, a figure who was at once everywhere and nowhere in the art world, and who used his work to spin a personal myth.

That myth is on view in ''Ray Johnson: Correspondences,'' a retrospective exhibition organized by Donna De Salvo for the Wexner Center for the Arts in Columbus, Ohio, and making its debut at the Whitney Museum of American Art.

The show is arranged along rough chronological lines and touches on Johnson's many interests, including graphic design and performances, painting and drawing, and his loose affiliations with art movements like Fluxus and with avant-garde poetry. But the focus is on the collages. Many of them were also included in the superb memorial show at the Richard L. Feigen Gallery in Manhattan after Johnson's death; others have come to light since and are being exhibited for the first time.

Johnson was born in Detroit in 1927 and started out as an abstract artist, studying with Josef Albers at Black Mountain College in North Carolina in the late 1940's. Two paintings from that time, quiltlike patterns of nested squares, are in the show. And although little that Johnson did later resembles them, they suggest an important lesson he learned from Albers: the dynamic potential of systems in art. One could do a single thing over and over with minute variations and achieve something revelatory through repetition.

Johnson arrived in New York in 1948, just as Abstract Expressionism had peaked. New art was heading in other directions, becoming smaller, zanier, more hermetic. He considered Kurt Schwitters, Marcel Duchamp, Joseph Cornell and John Cage's Dada- and Zen-inspired esthetic of found materials and chance effects. And along with contemporaries like Robert Rauschenberg, he savored popular culture.

The earliest collages in the show are, in fact, startlingly prescient of Pop Art to come. His ''Untitled (James Dean in the Rain)'' and the smoldering, sunset-colored ''Elvis No. 1,'' both from the mid-50's, were produced years before Andy Warhol began to make his reputation with the same icons.

But Warhol and Johnson (who became friends) adapted such images in very different ways. Warhol took a deadpan, hands-off approach, exploiting the inherent glamour of his subjects to celebrate and question a cult of celebrity. Johnson marked the images up and personalized them by pasting on other elements -- squiggly black scarlike shapes to Dean's figure, bloody tears and Band-Aid-like patches to Elvis's face -- which carry homoerotic implications of tenderness and violence.

Such applied forms were the atomic elements of Johnson's art. Some were literally building blocks, tiny rectangles of thick, sanded cardboard that he joined into mosaiclike patterns. Others were commercial ready-mades, like target-shaped Lucky Strike labels. Still others were cartoons of phallic snakes and bunny heads that Johnson turned into a signature.
Although he was later inclined to pile these elements up, many of his best collages from the 50's through the early 70's are memorable for their spareness and clarity. The 1971 ''Keir Dullea Gone Tomorrow,'' with a picture of the artist Ed Ruscha and a single sanded block on a white field, is an example. So is the text piece ''Keep Mouth Closed'' (1966), which has the look of concrete poetry.

Perhaps most striking is a handful of monochromatic, whitish-gray abstract pieces in which faces and letters dimly surface from beneath layers of brushing and erasure. Collage is an inadequate term for these works (painting is closer to the mark), and they point to an austere, reductive, even monkish side of Johnson's character that his edgy humor often hides.
In 1968 Johnson moved to Locust Valley on Long Island, where he lived alone and communicated with his Manhattan friends by telephone and mail. His collages from the late 1970's and 80's grew increasingly dense, congested, even turgid, as if each were a repository for decades of accrued ideas and motifs. This is especially true of a series of black silhouette portraits, in which the sitters' heads are festooned with appliqued elements and over-drawing almost to the point of obliteration.

These portraits echo the 1950's Elvis collages, and the link points up a crucial feature of Johnson's output. Models of progress and development apply only minimally to his career. Its logic was nonlinear and self-reflexive. Core concepts and images ricochet back and forth over time. Collages were chopped up and recycled into other collages, which is why so many of them bear multiple dates, decades apart, or no date at all.

The Whitney show, installed on an entire floor of the museum, is to be commended for giving Johnson a full-dress retrospective treatment. But his work doesn't really fit the standard from-here-to-there template, and spacial generosity creates problems. Johnson's own preferred way for presenting his collages was to bunch them together in clusters so that their formal variety and thematic tensions were evident at a glance.

In the Whitney's glacial, open galleries, this effect is diminished. Individual pieces look lonely and adrift; the riffs and cadences that contribute to the excited texture of Johnson's oeuvre are hard to discern at a distance. An exception comes in a tight grouping of several pieces owned by William S. Wilson, one of the artist's most discerning critics. Otherwise much of the show's energy rises from vitrines jammed with letters, found objects and other ephemera.
This is a minor complaint. Everything Johnson did, however highly wrought, seems designed to mock the concepts of singularity and greatness. He specialized in the little nothing, the demi-masterpiece, and wore ''minor'' like a badge, a suit of armor, a gibe at the experts who worry themselves silly about this-is-better-than-that distinctions and whether they are getting them right.

But is his an art one can embrace and love? It is witty, technically brilliant and intellectually stimulating. It constantly courts preciousness, then adds resistance -- a shot of vulgarity, a flash of oddball beauty -- like a grain of a sand in an oyster. But it is also chilly, even creepy in its relentless linguistic games (Johnson said the only people who interested him were those whose names lent themselves to anagrams), its chatterbox formalism, its covert morbidity and its uninnocent connect-the-dots gossip.

A critic once said of Marianne Moore, a poet whom Johnson admired, ''She has great limitations: her work is one long triumph of them.'' The same is true of Johnson. His limitations are not those of Cornell, the artist who may have influenced him more than any other. Cornell's boxes exude an unguarded, fetishistic air, as if they were made for an audience of one, the artist himself, and anyone else is intruding. Their embarrassing, damaged vulnerability is their strength.

Johnson's art, for all its codes and keys, is public work, produced for a far wider audience. True, it was an audience that he more or less hand-picked, narrowed down like his mailing lists, and that's where limitations come in. But for that audience, he fashioned something complex and complete: a self-contained universe that is both internally coherent and, at its best, connects exhilaratingly with a wider world."
-reviewer unknown
Posted by Christine A. Tarantino at 3:16 AM

wonderful article.
i have been a ray johnson for years.

thanks for commenting!
peace,
christine